It is my big day. My thirtieth birthday. Can you believe it? I can’t. My friends freakin’ ROCK!!! Gifts, a cake in the shape of a cosmo (pink cake too!), balloons, dinner, drinks … you name it! I even had a birthday princess headband and wand. Love them. 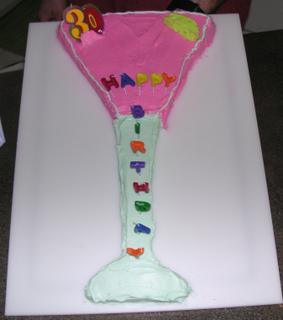 Let us not forget the cake men … many of them. Yummy!!! I guess they are right, I am a man-eater! They are irresistible!

I am not so distraught about leaving my twenties. More about entering adulthood. I am hoping I can still get away with the same shenanigans that I have for the past few years of my life. What else is there exactly?

I’ve had a few too many drinks tonight, so I need to head to bed now. Maybe I’ll run by McDs in the morning just for fun. Haven’t done that since I’ve been 30. Oh, I suddenly see a whole new world of new beginnings in front of me!!!!
Posted by MsIndependent at 12:13 AM No comments: Links to this post

I am starting to get hate messages warning me to blog or else, so here it is. I have put myself on somewhat of a dating hiatus. Not that I'm not communicating with men about possible dates, but just not really following through on them. I have reached a state of apathy currently.

Will he call? Hell, who cares? Not me.

If he does call, often I wait days to return the call if I do at all. Or hope that he is calling to cancel a tentative date.

Just seems like it takes SO MUCH EFFORT these days, and I'd rather hang out with my girl friends (and of course their fabulous beaus). Apparently, though, I am not alone with this feeling. Fish, my favorite blogger, is having a similar experience: http://thisfish.com/Archives/000981.html

Hopefully this notion will pass soon enough or this blog will have to be laid to rest ... and we just can't have that!
Posted by MsIndependent at 2:09 PM 1 comment: Links to this post

when i received this today, i had no choice but to post it. i mean, an article about about dating in DC? how appropriate ... enjoy someone else's perspective here for once!

From George Magazine...
By Ann Coulter

The really appropriate setting for writing an article about dating in the nation's capital would be home alone in my D.C. apartment on a Saturday night. By chance, however, I'll be in New York this weekend. By chance, I've been in New York every weekend for approximately the previous 147 weeks, give or take a few shuttle mishaps. But since all my stuff is in D.C., I do have to drop in occasionally. Consequently, I've become a minor authority on dating in Washington. Maybe not on dating exactly but one crucial element of any date: "the ask." Boys in Washington don't know how to ask for a date. What they do is try to trick you into asking them for a date. They say, "I know you're really busy, so call me when you'd like to go out to dinner" or "Call me when you're back in Washington" or, my favorite, "Are we ever going to get together?" What are you supposed to say to such completely insane things? I've never figured that out, which is why these conversations tend to end in hostile silences.

"Call me when you'd like to go out for dinner" isn't asking for a date; it's asking me to ask you for a date. For male readers in Washington, asking for a date entails these indispensable components: an express request for a female's company on a particular date for a specific activity. Oh yes, and the request has to be made to the female herself. Roughly once every two weeks, I get a woman on my answering machine asking me if I'd like to go out with some dumb-ass male friend of hers who's too afraid to call me himself. (For those outside Washington, I'm not kidding.)

This isn't a screeching, hate-filled, anti-male screed. It Is a screeching, hate-filled anti-D.C. screed. There's no large sociological point about relations between the sexes here. It's Washington. I know this, because while D.C. males are on my answering machine with vague announcements that they've called, I still get messages from boys in New York saying, for example, "I have tickets for the opera next Friday. Would you like to go?" Males in every other city know how to ask for dates. So it's not me; it's not feminism; it's not the millennium. I've begun aggressively inquiring of every female I come across:"Pardon, but have you noticed that boys in Washington don't know how to ask for dates?" The consistent response has been a raft of stinging denunciations too numerous to catalog here. If I were asking something preposterous, like "Say, have you noticed all the alligator carcasses in the street lately?" I wouldn't be getting such emphatic affirmations every time. Recently, I asked a female on Capitol Hill about this, and she said right off, as if I were a psychic, "We were just talking about that on Saturday night!" She had been discussing it in a mixed crowd and reported that the boys began hectoring the girls-C'mon, this is the twentieth century. You're modern women; you can ask for dates. I asked her if waiting for women to ask them for dates had worked for these guys. No, they just sit around with friends, year after year, waiting for their theory to play out. This is also how government programs are conceived and tested, so it makes perfect sense that only in Washington are males still waiting for action on the no-ask dating plan.

In fact, the incapacity of the D.C. male to request a date is the perfect synecdoche for this whole pathetic city. There is a total absence of normal civilized conventions in Washington. The customer is always wrong, the cabs don't have meters, and complete strangers ask for the sports section of your paper on the subway. In every real job I've ever had, it was a convention for the boss to give a Christmas gift to the people who work for him. In Washington, minimum-wage staffers take up a collection to buy Christmas gifts for the senator and chief of staff. There's a reason boys asking for dates is a convention of civilized society.

First, someone's going to have to face rejection. It may as well be the aggressive, testosterone-pumping, hunter male. Speaking for myself, I'll take 69 cents on the dollar (or whatever the current feminist myth is) never to have to ask for a date. But the whole point of this convention is to reduce, if not eliminate, the need for rejection anyway. The entire dating system runs on implicit understandings. If the hunter male doesn't like a girl, he doesn't call. That's the end of it. If the hunted female doesn't like the boy, she's unavailable without a good excuse three times in a row. No explanations, no hurt feelings. When you start fiddling with a centuries-old system like this, you're just asking for trouble. If you can't operate by covert signals, you're going to get horrifying, misery-inducing explanations.

Second, no one makes any money in D.C. From this, I deduce that young men should make loads of money. There may be grating aspects to 20- and 30-somethings earning kazillion-dollar bonuses, but at least wealth gives them the self-confidence to ask for a date.

Third, TV is reality in Washington. Restaurants close at 8 P.M. A few really, really late-night places stay open until nine or 10, but even these sometimes close unexpectedly at eight. (In addition to being always wrong, the customer is an impediment to the serious business of Washington, which is watching TV.) So everyone is home watching TV all the time. Like many New Yorkers, I never had a TV, but I got one when I moved to Washington. The peculiar thing about watching TV after a long lapse is that you are actually aware of TV changing your perception of reality. I've started subconsciously associating men of the cloth with murderous Nazi conspiracies, for example. I've got a million more television-induced perception shifts, but the relevant one here is that females are invariably the sexual aggressors on TV. The typical romantic overture on the small screen is boy meets girl, girl drops dress. TV hasn't ruined me yet, though. My romantic fantasy is still this: Girl meets moving-company guy, girl moves back to New York.
Posted by MsIndependent at 9:54 AM 3 comments: Links to this post

the last i spoke to the redhead, he asked if the fact that his match.com profile was still up was an issue. well, he didn't really ask, he just said he hoped it wasn't an issue with us. he hoped that wasn't the reason my profile was active again and causing the awkwardness between us. his profile is always active when i do look at it, which i don't do that often. but tonight, i felt compelled to look at it. his profile hasn't been active in over 5 days. is he trying to say something to me, or is it just a coincidence? i definitely do not think the latter, but not not so sure about the former.

six feet under is on tonight. is it odd that it makes me so happy? it hasn't been on in so long. it makes me feel somewhat normal. maybe because all of the characters are so completely nutty, i seem sane. i love that show ...
Posted by MsIndependent at 9:34 PM No comments: Links to this post

MsIndependent
A single female Washingtonian. I am an attorney and work at a large law firm. You'd think I have no time to date, but a girl has gotta have a social life, right?

Links to Some Fav Sites